Kashi Hummus Crisps: Deliciously Different, and Good for You, Too!

The options for chips have really expanded, with all sorts of flavors and ingredients...some not so good for you, some good for you.

But can you believe...hummus in a chip?

Thanks to the amazing people at BzzAgent and Kashi, I was able to try the new Sea Salt and Olive Oil Hummus Crisps for free in exchange for my review.

So, what the heck is a hummus crisp? Well, it's a combo of popped whole grain chips with the goodness of chickpeas. Chickpeas are, in fact, the first ingredient listed. The benefits of that crazy matchup? Behold the short list. (Information via the Kashi site.)
Seriously. 27 chips for 120 calories, with all those other nice stats. The usual chip suspects are much meaner than that in the calorie department. In addition, there's no partially hydrogenated oils, no high fructose corn syrup, and as the bag tells me, "No artificial anything". 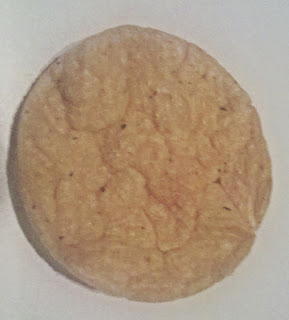 Texturally, they're in between a popcorn chip and a tortilla chip. Nice and light, but dense enough to pick up dip and with a great crunch. They're about the size of the bite-size round tortilla chips.

Ah, but since they're so healthy, they must have the flavor spectrum of styrofoam, right?

The taste is lovely. Despite the name, it's not just olive oil and salt, but an array of seasonings that meld together to really create a tasty snack. I thought I detected a bit of rosemary, myself. It's tangy, salty and the combination gives a comforting down home feel that makes this healthy crunchtastic nibble a comfort food. The flavor makes a statement on its own, but I really enjoyed it with my personal favorite dip: Medium-heat salsa. 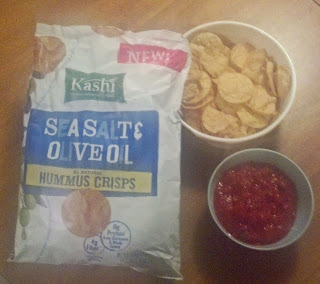 I offered them to my kids, ages thirteen, four and nineteen months. The teenager snorted and walked away, and the four-year-old enjoyed a handful.The  youngest adored them. So two out of three of my children liked them. We ignore the teenager's opinion generally, anyway.

Speaking of updates...if you want to keep up with Kashi and their innovations, get with them on Facebook or Pinterest. It's really a good idea to stay abreast of the deliciousness.
Posted by Unknown at 4:06 AM