My Good2grow Sampling: The Rainbow Connection!

The latest thrill for my mom's group via Moms Meet almost didn't make it. When my son saw what it was, it took everything I had to make him wait. 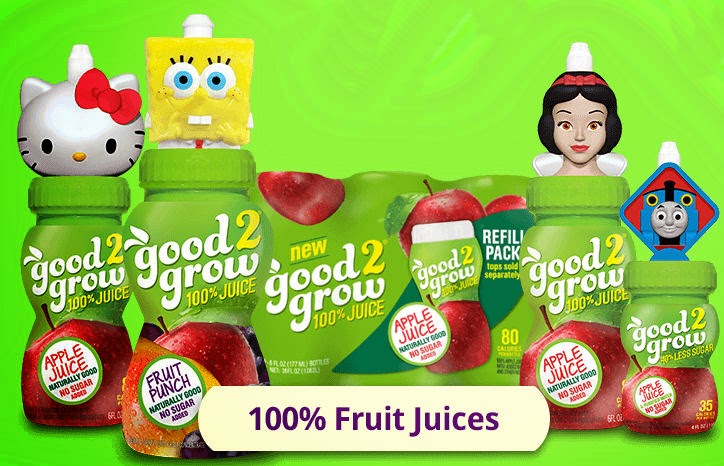 Tada! Good2grow juice. Why was he so excited? Because it's not just awesome juice, it's the delivery. They have these cool toppers that go on the tops of the juice bottles and act like a water bottle valve. They close up tightly and switch easily to another bottle.

I like to plan my meetings around themes, and this one made me think of the "food rainbow". So a rainbow theme it was! 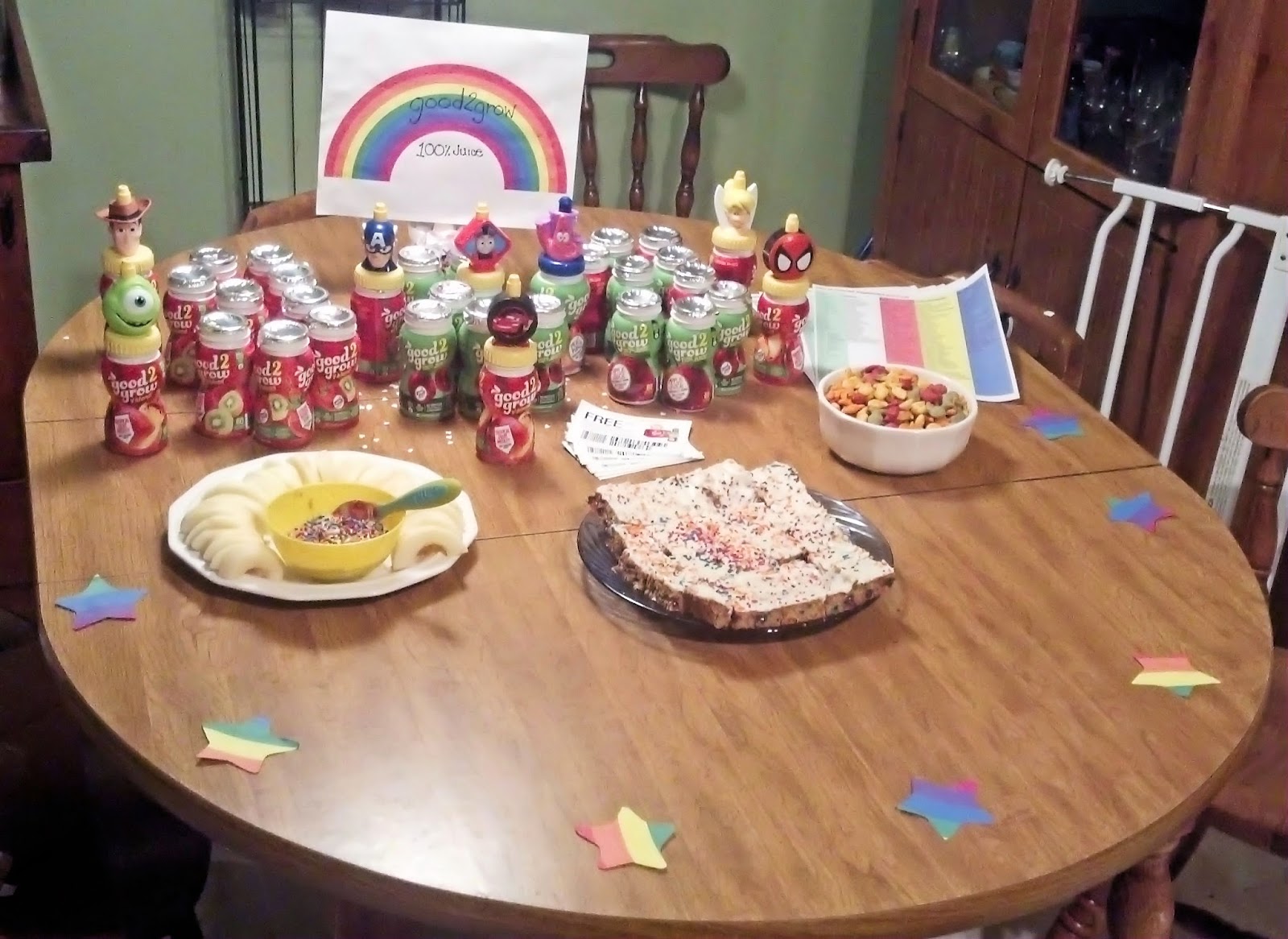 The decor? Me, and my printer. First, I printed out a rainbow on standard paper: 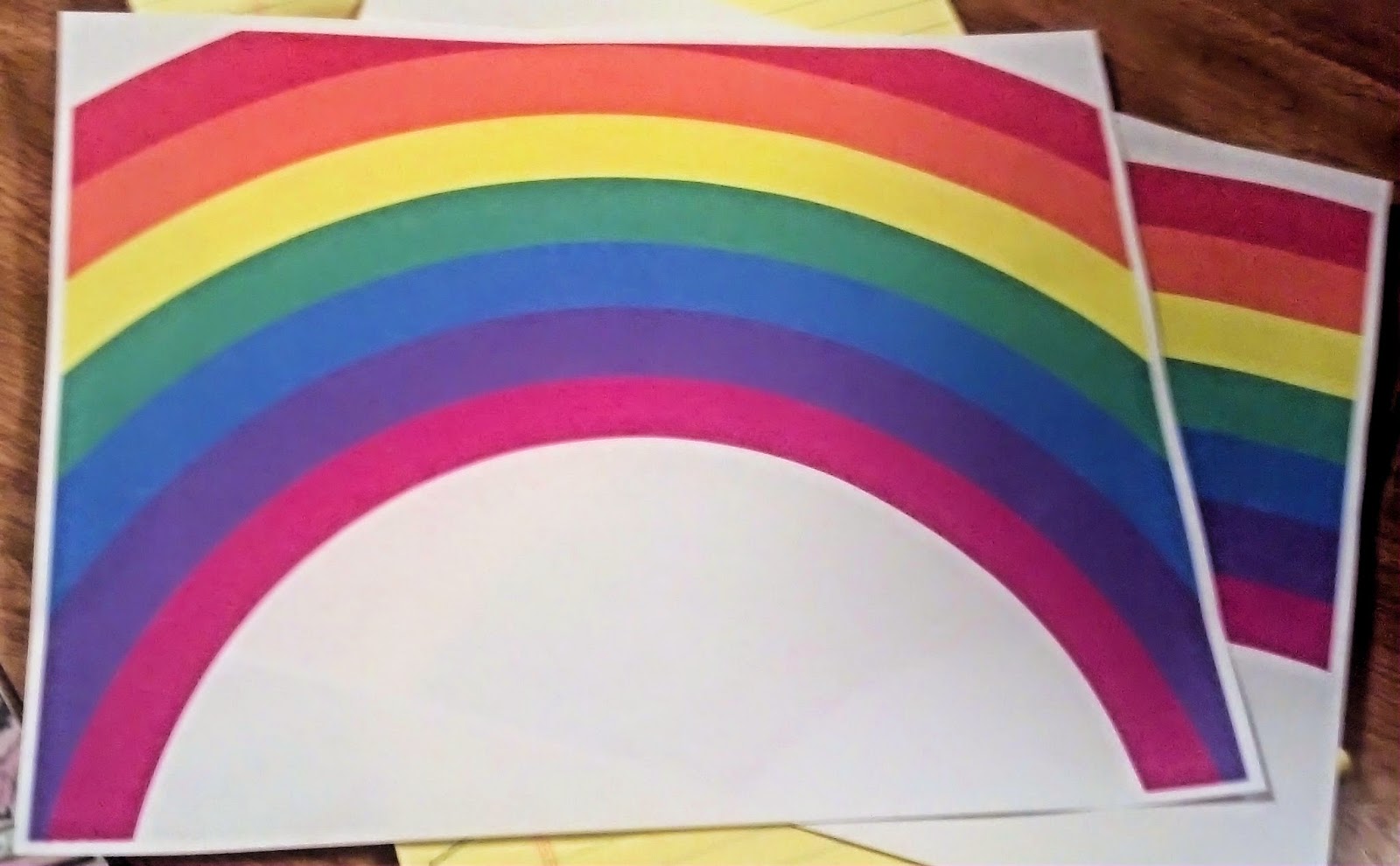 I traced stars on the reverse side of the paper and cut them out. I didn't have a big enough stencil, so I used a cookie cutter. 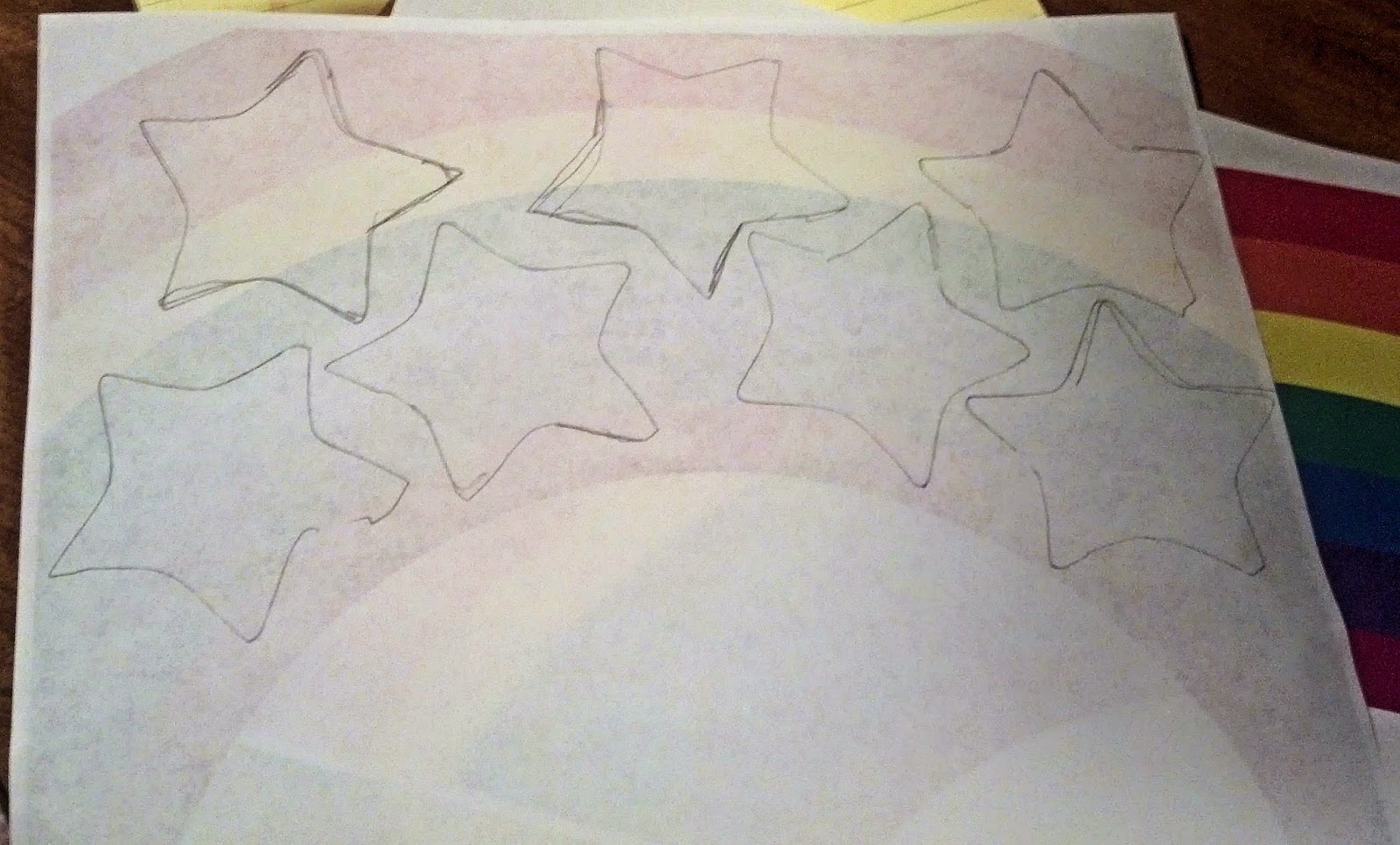 The scraps left over after the stars were cut out were turned into confetti, courtesy of my handy heart-shaped hole punch: 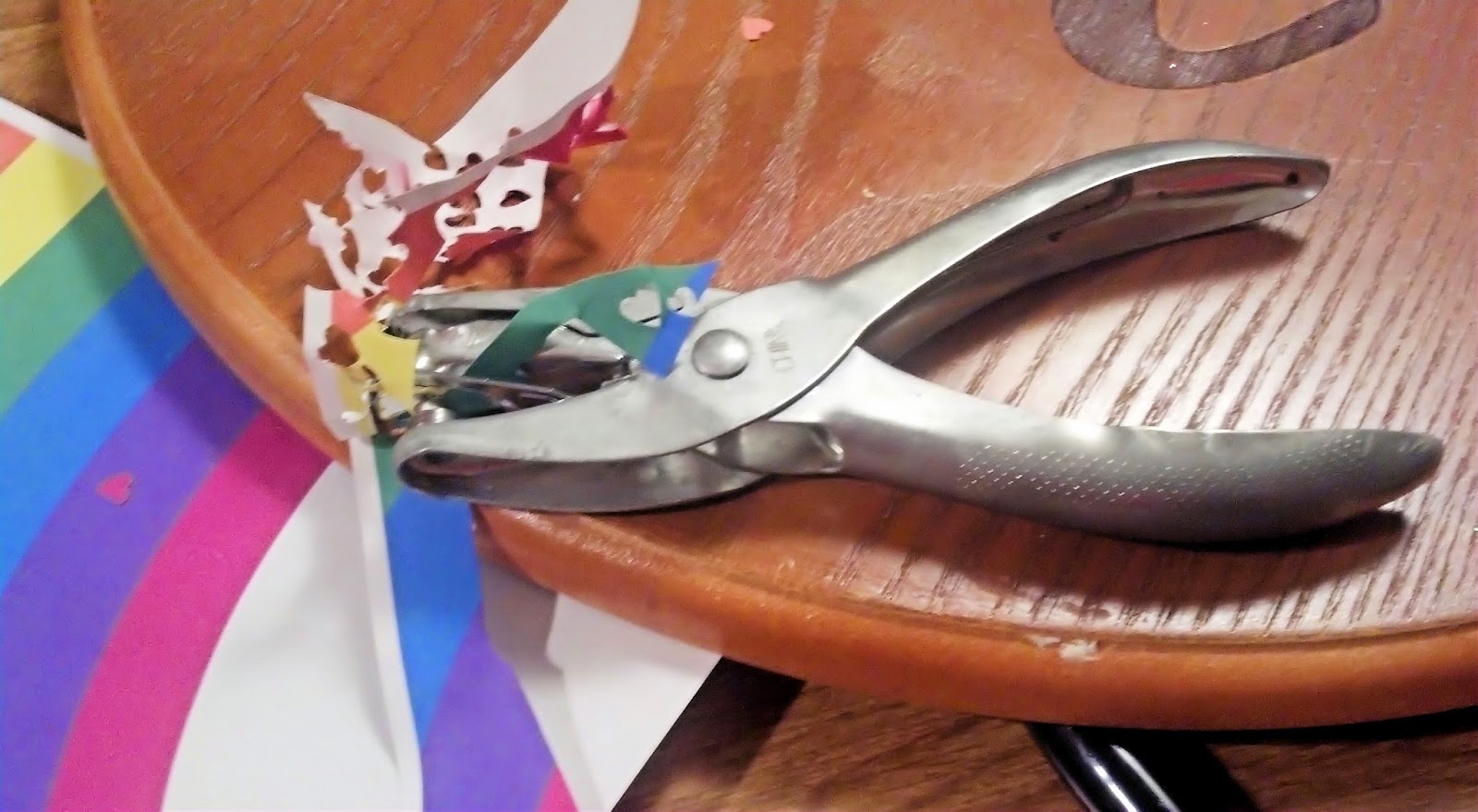 The scraps left after THAT formed a decorative base for my display sign, helped a bit by some rice. 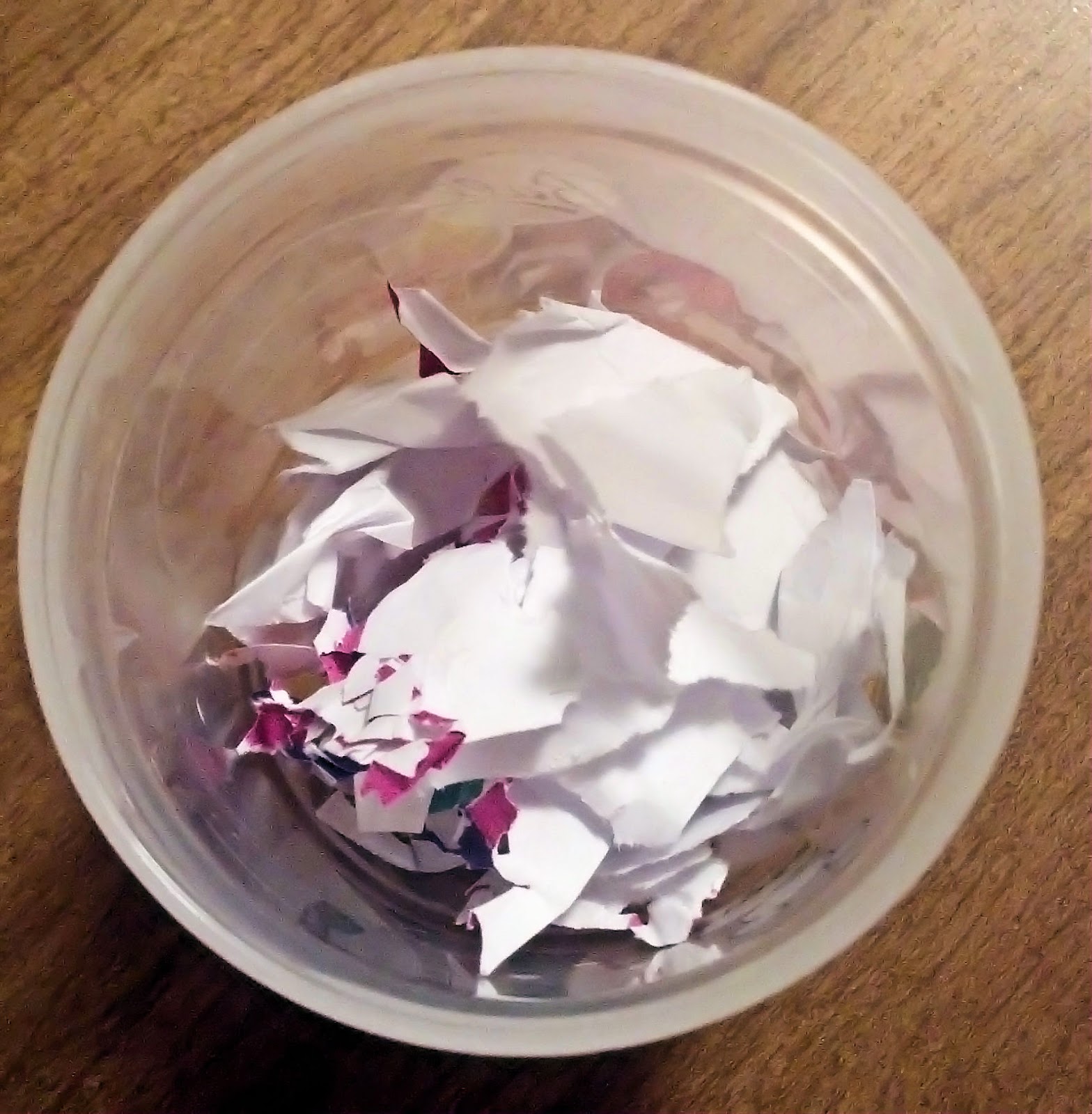 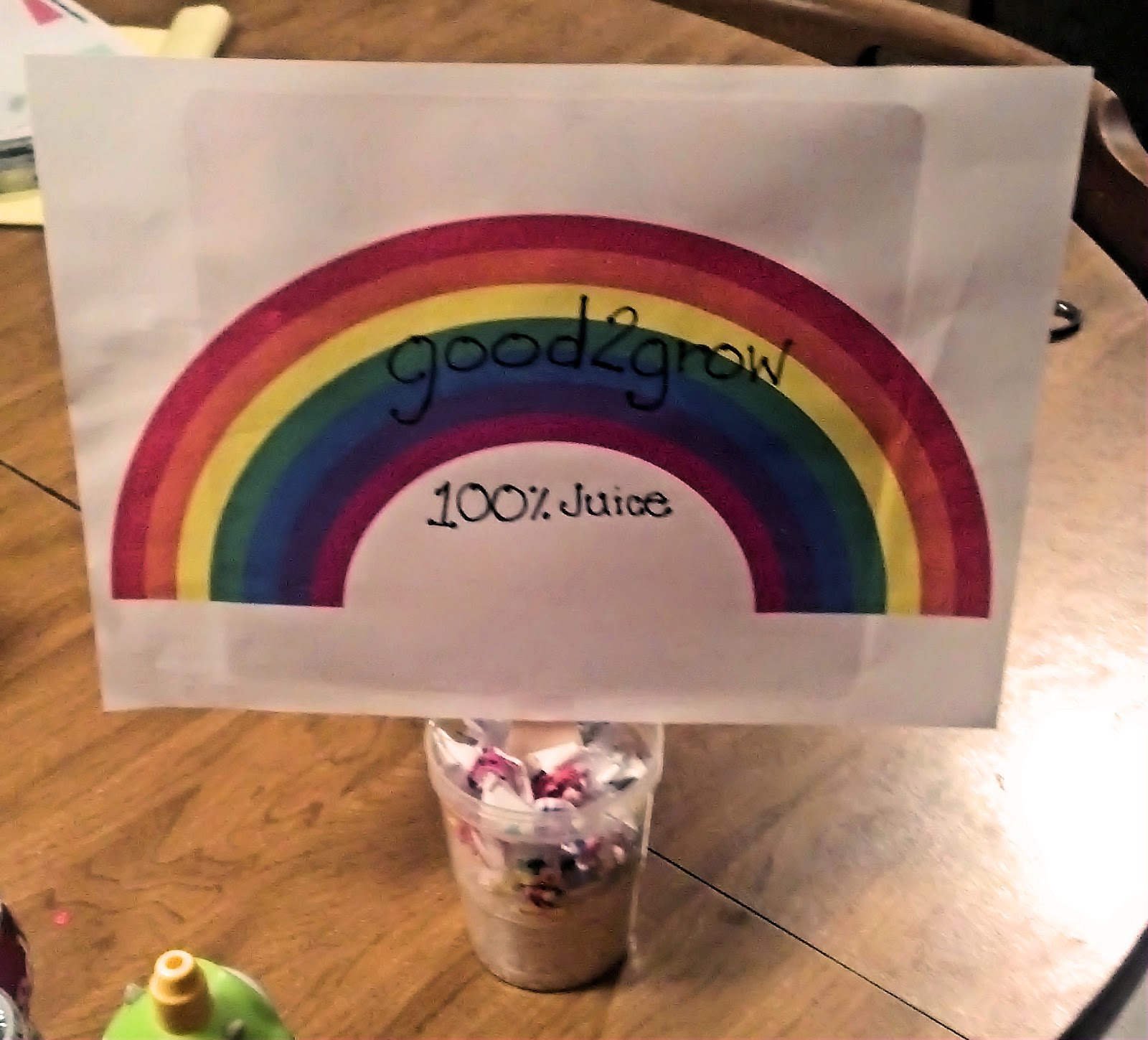 I arranged the juice bottles to spell out "g2g" to add to the theme. 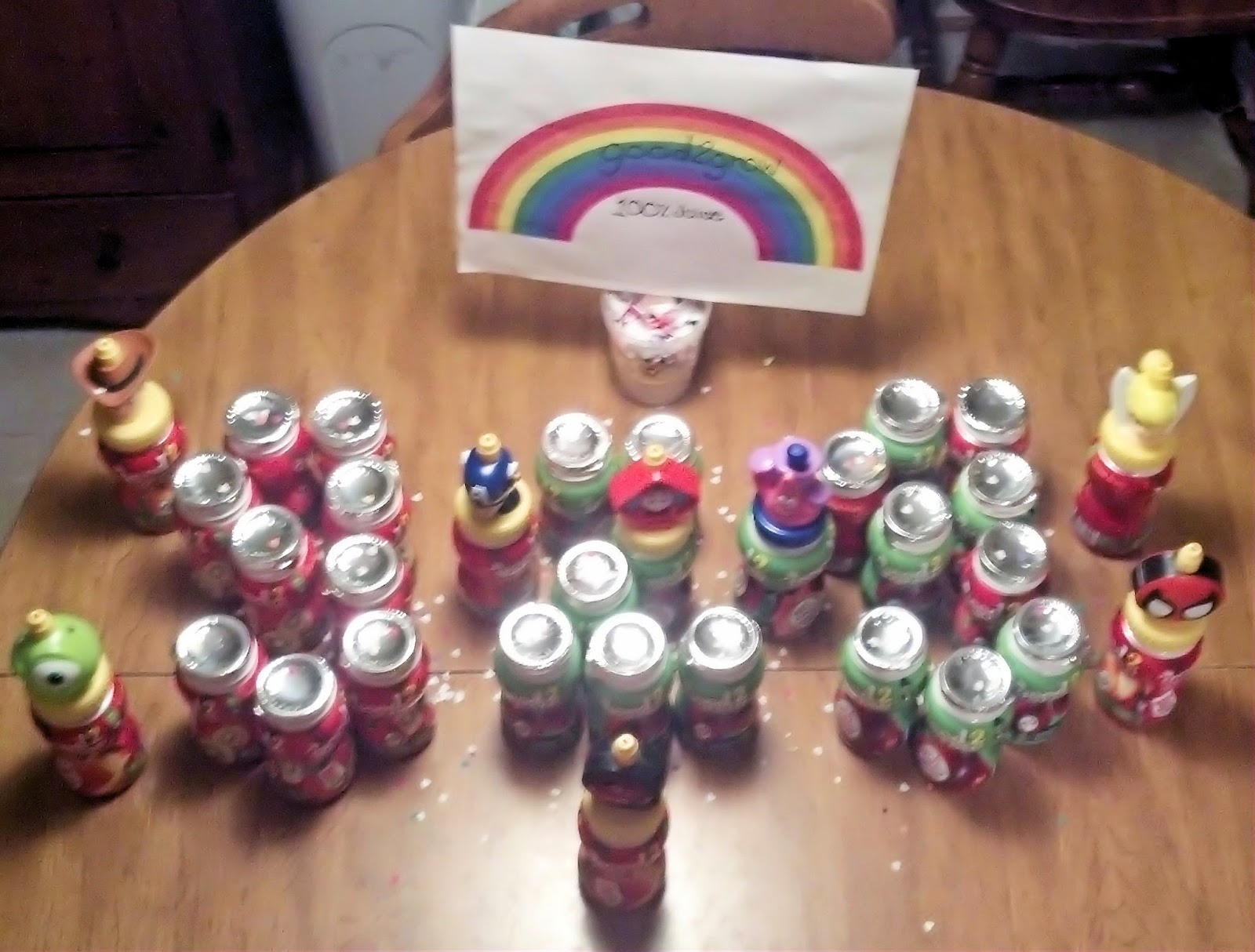 No gathering is good without snacks...the rainbow theme continued in those. 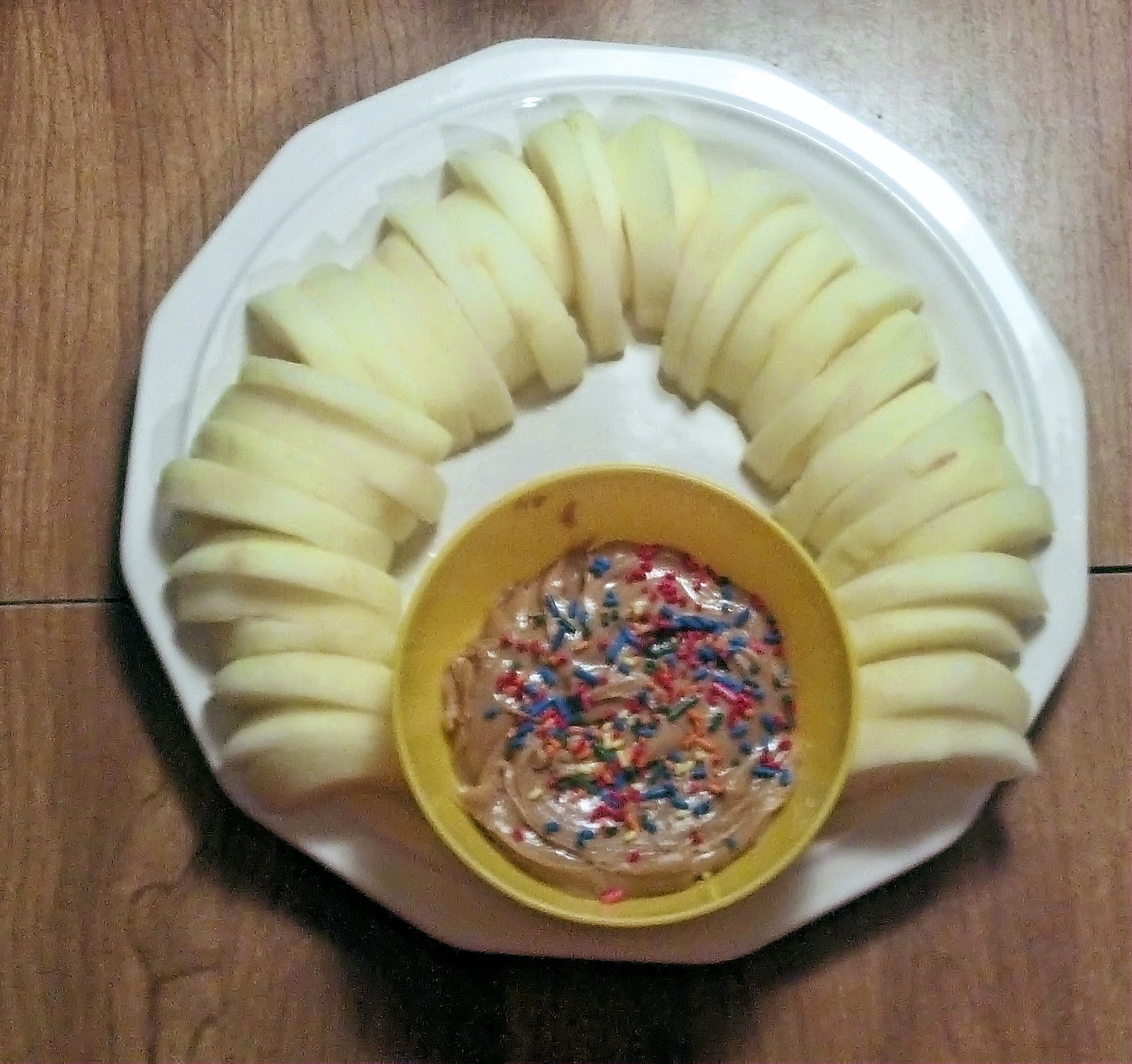 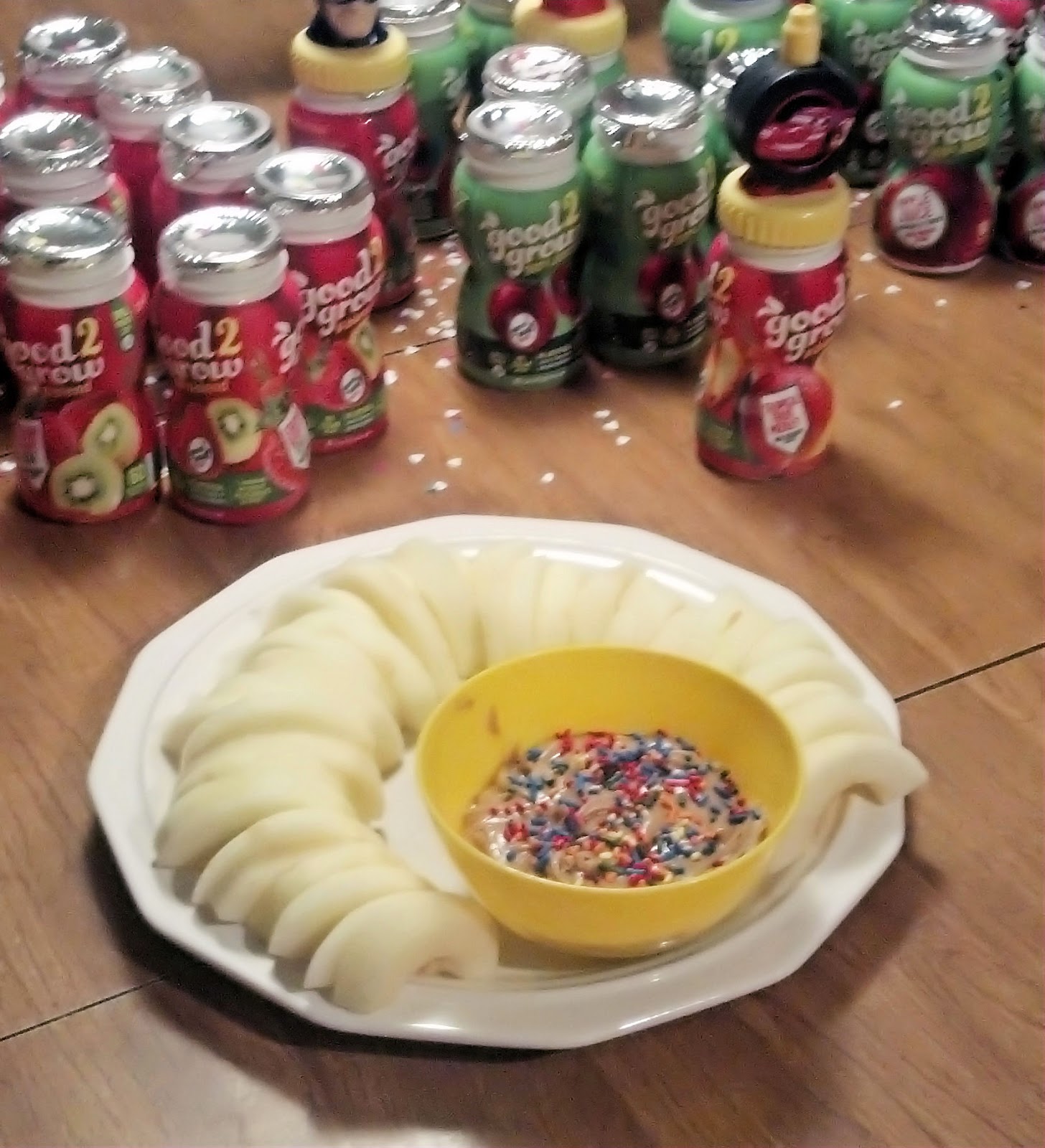 This is my apple slice rainbow. I cut the slices into rainbow shapes as well, as you can see. The dip is simply peanut butter and a dash of sprinkles. If you have peanut allergies, any nut butter would work as well, or even Greek yogurt. 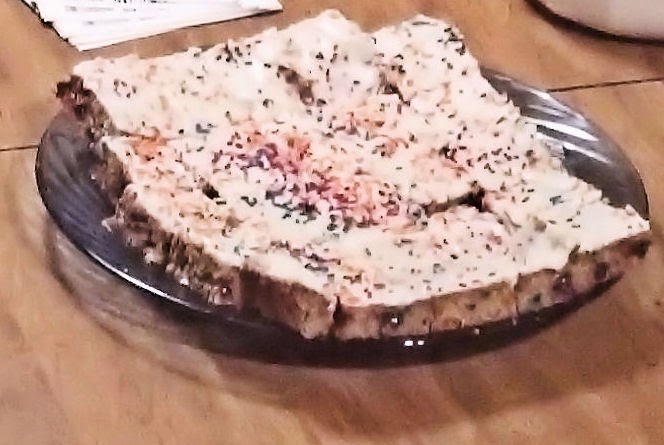 The final addition was rainbow goldfish crackers, for a salty treat.

We ended up having more kids than character bottles, so we played a game. 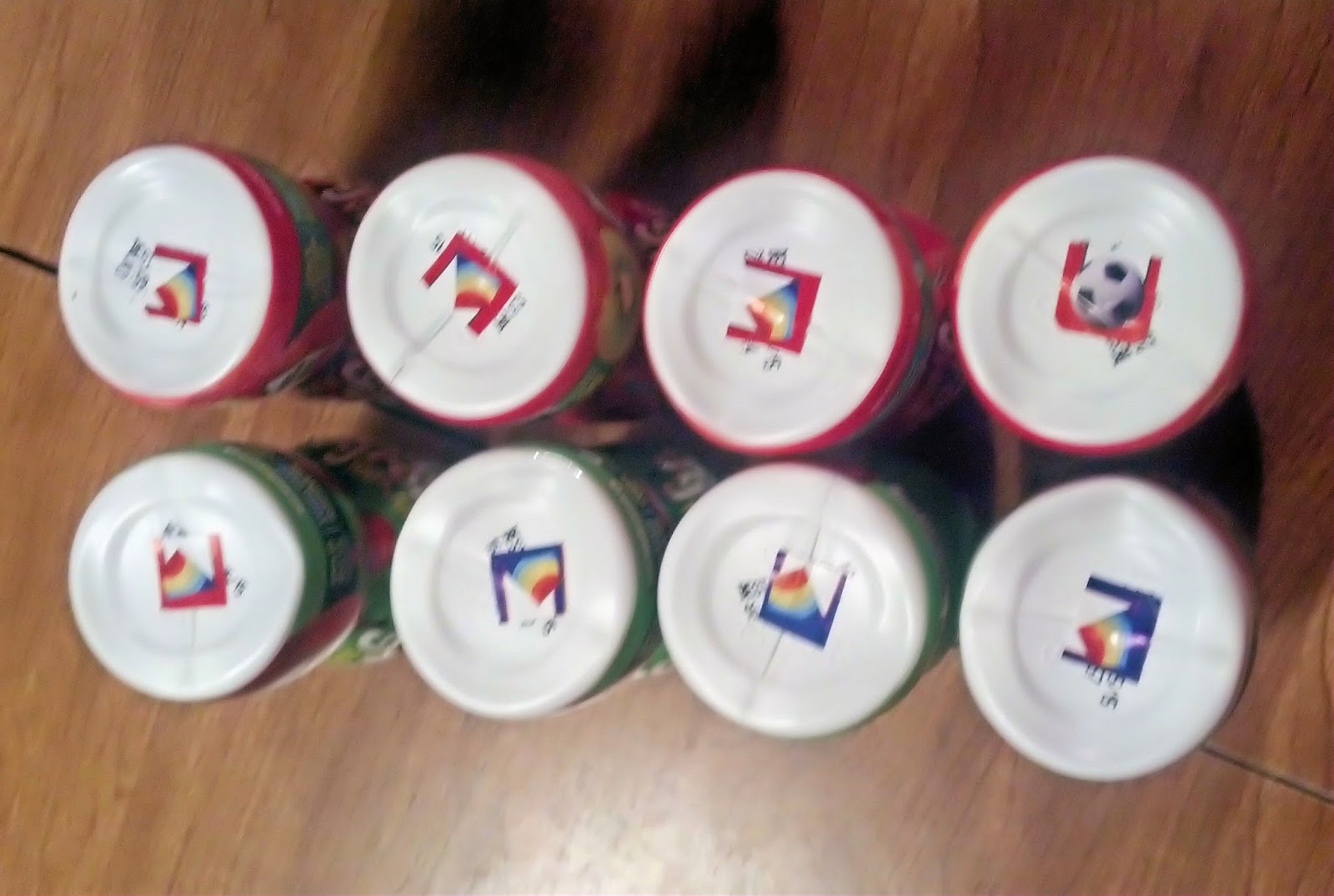 Before arranging the juice bottles, I put stickers on eight of them and put them in at random. The kids picked bottles, and the one who had stickers on the bottom got to pick a character bottle. The soccer ball sticker got first pick.

I also included this handout with the "food rainbow", courtesy of disabledworld.com: 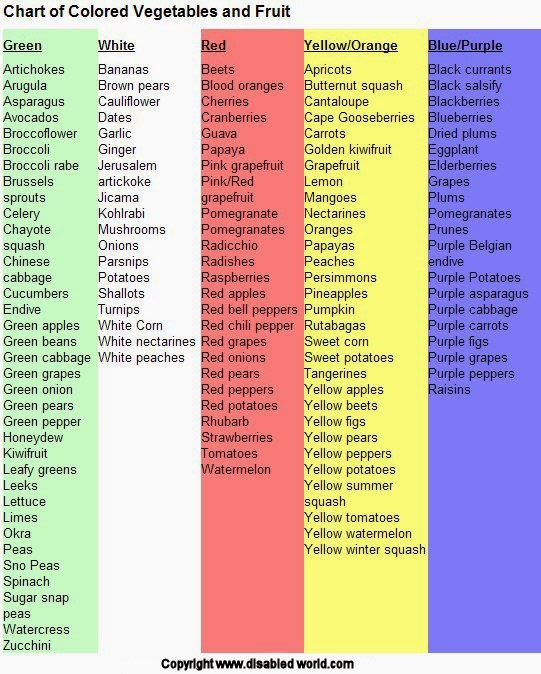 As far as reviews, the parents were amused, and thought the prices were reasonable, since the character caps could be reused. The only concerns voiced were that the refill packs were hard to find in stores. We discussed reusing the empty bottles in that instance until distribution picked up. We found them at our local Safeway, so that wasn't too much of a problem except for only two flavors being available.

The raves came from the kids. Not only did they enjoy the toylike bottle tops, but they said the fruit punch flavor was a new favorite in the fruit punch genre. Every kid was asking for more when they got home. Needless to say, the coupons were gone fast.

A good time was had by all, and I even saw the bottles making the rounds at the playground later in the week.

I received products from Moms Meet for sharing and review purposes. My opinions are my own.