I' m normally one to keep my posts light, but my baby girl is under attack, and no one can seem to stop it. Or cares.

My teen daughter has been through a rough time. She had trouble making friends. She had social problems all through school, until we finally received a diagnosis of Asperger's. Her major functional issues are purely social; she doesn't have ADD, or anything like that. She doesn't require medication, and is instead receiving counseling, attending a special needs school, and learning coping techniques.

In this process, she discovered an affinity for making fan videos, and despite misgivings, I allowed her to get a YouTube account to show her work to her friends. I monitored her account, and she had no problems at all.

Then she got a new kid in her class, a self proclaimed "troll". When she refused to follow his YouTube account, as he used it exclusively for trolling, he told her we would be going after her account.

Suddenly, rude comments started appearing in her Discussion section. Someone posting under her name, saying things like "I'M GAY" and "I'M A BITCH" and "I POOP MY PANTS". YouTube's Advice is to change your password and put comments on mod only, which we did. No way to report the person, since they weren't using an account that could be posted into their immovable form. I figured it was her new classmate, but there was no way to prove it. I called the school, but they said they couldn't do anything either. Even when a classmate joined the fray and was caught, he simply changed his account name and denied it.

For a while, I thought the changed password and comment mod did the trick. No comments even attempted to come through.

Unfortunately,  it appears my daughter had picked a password that was hackable. She comes downstairs about an hour ago, hysterical. All of her videos, more than 80, are gone. In addition, replacing her About description is this: (edited for content, but you can see what it said.) 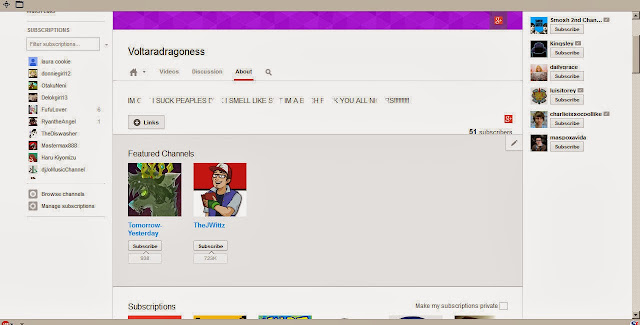 Yep. On a teen girl's account, a filth-ridden phrase with gay and racial slurs. Thank God that my daughter was so upset over the missing videos that she never saw it.

You'd think the notification system would have sent some sort of warning, but nothing. No warning that the videos were deleted. No warning that that horrible phrase was on an account with her name on it. Not a damned thing. My account was linked up to it as well as hers, and I didn't get anything either. The multiple safeguards I put in place were useless, BECAUSE THE TROLLS ALL KNOW HOW TO GET AROUND THEM.

There are no ways at all to talk to a human being at Google or YouTube.  I posted this to YouTube's Facebook page:

I have a feeling I won't get a response, though. They're all about the money, and one teen who needs an outlet for her stress doesn't bring in the millions. So my options are to close her account and let the trolls win, or leave it open, encourage her to start over again, and subject her to further abuse when once again, security is circumvented.

Since this is Blogger, maybe someone will pay attention. These little monsters are nothing but bullies and criminals, yet they're allowed free reign to destroy almost everything. Maybe we're not advertisers with big bucks, but we are consumers, and we should matter.

My daughter's account link.
Posted by Unknown at 6:20 PM